Coronavirus Cases at end of March

Just 2 weeks ago I looked at how the previous 4 weeks from mid-February to mid-March had qualitatively changed the situation for many countries in this pandemic. The pace of change is not letting up. Here I review my predictions from 2 weeks ago and summarize the weekly changes since then.

Numbers for the US:

All three predictions came to pass, the last one a few days sooner already. By now, the US has far and away the most active cases (100,000 more than Italy at rank 2), the most new cases (3x that of Spain at rank 2) and nearly twice as many confirmed cases as Italy at rank 2.

Here is how the percentage of confirmed cases has evolved throughout March: 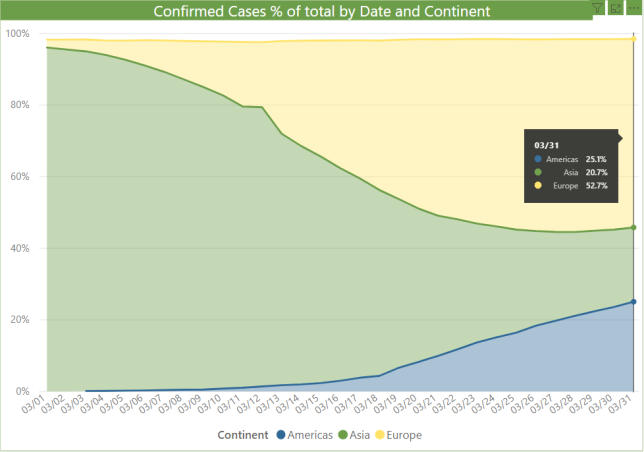 At the beginning of March (left side of chart), Asia clearly dominated the case numbers, with China about 90% and South Korea about 4% of all cases. Italy had 2%, Iran 1% and France and Germany only 0.1% of all cases. While China already had ~80,000 confirmed cases, the US had only 74 confirmed cases just a month ago!

By mid-March (middle of chart), Europe had grown to 1/3 of all confirmed cases, with Asia / China accounting for most of the other 2/3 of cases. The US had about 3,500 confirmed cases, or 2% of the total (166,700) at the time. With active cases, Europe was starting to dominate the picture, with Italy (~20,600) having nearly twice as many active cases as China (~10,800). China was reporting very few new cases and lots of recovered. Italy and soon Spain were reporting ever-growing numbers of daily new cases, with slow growth on the recovered side (and sadly strong growth of deaths).

No at the end of March (right side of chart), the US is clearly the country with single-biggest confirmed and active case numbers. The Americas now accounts for ~25% of all cases, proportion growing. Asia / China’s portion has diminished to ~20% of all cases. And Europe has crested its highest percent (53.9% on 3/28) and is slowly reducing its proportion of worldwide confirmed cases.

Here is the distribution of all 189,510 confirmed cases in the US: 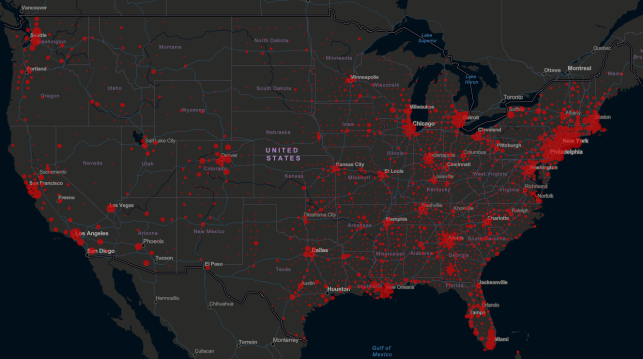 Confirmed Covid-19 cases in the US as of Mar-31. Source: Johns Hopkins dashboard.

The dashboard of Johns Hopkins University allows for the US to drill from country to state to county level. This is helpful in understanding where clusters of confirmed cases are. One can clearly see the large metropolitan areas with more and larger dots than in rural areas such as in the Western half of the continent.

Like many analysts, I have created my own dashboard based on the daily refreshed datasets from JHU GitHub. This has been an interesting exercise in many ways, partly due to the fast changing but freely and freshly available data, but also due to other examples of widely shared charts on social media.

One example of a new chart I haven’t seen elsewhere is a scatter plot of all countries with > 1,000 confirmed cases on a timeline through March.

This shows Spain and Italy being located in high single digit Case Fatality Rates (CFR) at the end of March. Italy’s and the US trajectory are highlighted. Italy’s CFR shot up and exceeded 10% – often attributed to the strain in their overwhelmed medical system. It’s also a less affluent country on the whole, but the hardest hit region of Lombardy is one of the richest in Italy, so it can’t be mainly attributed to an underfunded healthcare system. By contrast, the US CFR trajectory has stayed low throughout March and reached only about 2%.

As we are heading into April, it remains to be seen how well all these countries can flatten their curves, reduce the peak of confirmed / active cases and ultimately get through the pandemic with a minimum of deaths. No forecast tonight, but more analysis ahead in the weeks to come!

Posted by visualign on April 1, 2020 in Uncategorized

← Weekly changes in the Coronavirus pandemic