Side by Side: Apple, Microsoft, Google, Amazon

Ed Bott at ZDNet.com wrote a post with the title: Microsoft, Apple, and Google: where does the money come from? He looked at the quarterly reports of these companies (links to sources in the article) and displayed a pie-chart of the revenue mix for each of them. Inspired by that, I added a fourth company – Amazon (source: 10-K for 2011) – and aggregated those pie-charts into one graphic. 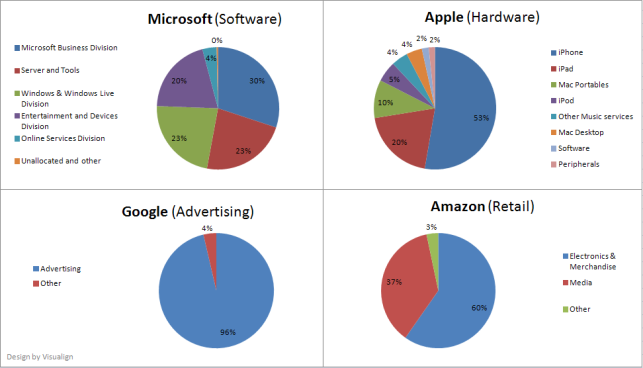 All four are large consumer-oriented technology companies; like millions of customers, I use many of their products and services every day. They each operate with different businesses models:

Yet as a consumer I rarely think about these differences. All of them use state-of-the-art technologies like cloud-computing and mobile devices to achieve integrated end-to-end experiences geared to increase revenues in personal computing (Microsoft), smart mobile devices (Apple), online search (Google) or shopping (Amazon). And arguably all of them derive major competitive advantage from their software, such as Apple’s iOS which introduced the touch interface.

Perhaps most surprising is Google’s almost singular reliance on advertising, which makes it a very different business model. They offer all their technology for free – from search to mapping to operating systems and social media – to grow and retain online attention as enabling condition for advertising revenue. For a business this big the near complete dependence on one source of revenue is unusual; perhaps its time for Google’s leadership to seriously consider a diversification strategy? Without it Google is arguably more prone to disruption (such as from Facebook) than the other companies. Speaking of disruption: Apple derives almost 3/4 of its revenue (73%) from iPhone and iPad, neither of which existed 5 years ago. As Ed Bott points out, those two products now drive an astonishing $33.5b revenue per quarter!

To compare the companies by their absolute numbers, here is a bar chart of market capitalization, revenue and profit: (all in billions of Dollars and for Q4 2011, market cap as of 2/3/12) 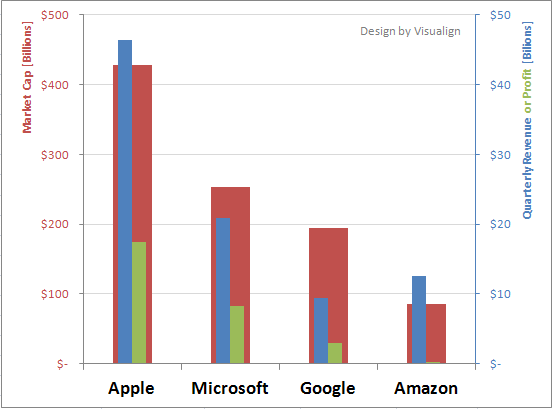 Market cap of these four companies combined is approaching $ 1 trillion. Much has been written about the differences in market valuations relative to revenue and most importantly profit. The markets undervalue Apple and overvalue Google and Amazon. Let’s compare these dimensions (and number of employees) in the following radar plot:

The plot shows the relative performance of all with the highest in each dimension normalized to 100%. Amazon shows by far the smallest profit in the last quarter. Given it’s retail nature, it’s profit margins have always been smaller; and CEO Jeff Bezos has long emphasized the strategy of investing in future growth at the expense of present profits. Microsoft continues to enjoy very solid profit margins in a large, well diversified business. Google has incredible talent and for now is the undisputed king of online advertising. But Apple leads in all three factors, and it achieves 2x Microsoft’s results with less than half the number of employees! Apple’s profit is 1.5 times that of the other three combined! And it makes more than 60% of the profit with less than 20% of the employees. In fact, Apple’s market capitalization is now higher than $10m per employee! It must feel pretty special to be one of them these days…

Postscript: On Feb-13 analyst Horace Dediu at Asymco.com published an article with time-series data for the above companies (except Amazon) over the last 18 quarters (since 2007). It shows the evolution over time as depicted in this chart:

The article is called “The World’s Biggest Startup“. It’s main point is this: Microsoft and Google both grew their businesses steadily, but did not change their type of business. Apple did some of that in its established business segments, but more importantly and disruptively it added new categories (iPhone and iPad) for dramatic growth. That’s what startups do. Just so happens that Apple – whose stock today for the first time hit $500 – is also the most highly capitalized company in the world (around $460B). If Apple is a startup now, what will they look like when they are fully established?

Posted by visualign on February 6, 2012 in Financial, Industrial

5 responses to “Side by Side: Apple, Microsoft, Google, Amazon”