The site worldmapper.org has published hundreds of cartogram world maps; cartograms are geographic maps with the size of the depicted areas proportional to a specified metric. This leads to the distorted versions of countries or entire continents relative to the original geographical size we are used to. (We recently looked at cartograms of world mobile phone adoption here.)

One interesting set of cartograms from worldmapper.org relates to scientific research. The first shows the amounts of science papers (as of 2001) authored by people living in the respective areas: 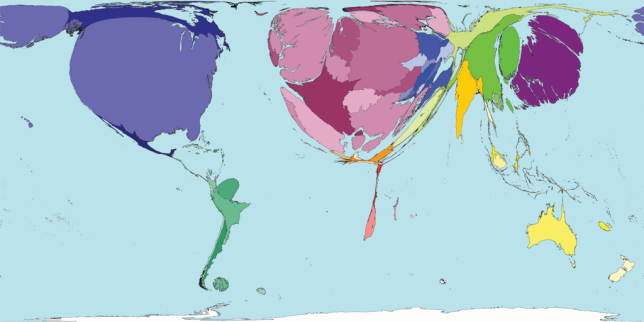 Another shows the growth in the above number between 1990 and 2001:

This map shows the growth in scientific research of territories between 1990 and 2001. If there was no increase in scientific publications that territory has no area on the map.

In 1990, 80 scientific papers were published per million people living in the world, this increased to 106 per million by 2001. This increase was experienced primarily in territories with strong existing scientific research. However, the United States, with the highest total publications in 2001, experienced a smaller increase since 1990 than that in Japan, China, Germany and the Republic of Korea. Singapore had the greatest per person increase in scientific publications.

It is worth noting that the trends depicted are based on data one decade old. It is likely, however, that those trends have continued over the past decade, something which Neil deGrasse Tyson points out with concern regarding the relative decline of scientific research in America in this YouTube video:

Another point Tyson emphasizes is the near total absence of scientific research from the entire continent of Africa as evidenced by the disappearance of the continent on the cartogram. With about a billion people living there it is one of the stark visualizations of the challenges they face to escape from their poverty trap.

Posted by visualign on January 3, 2012 in Scientific, Socioeconomic